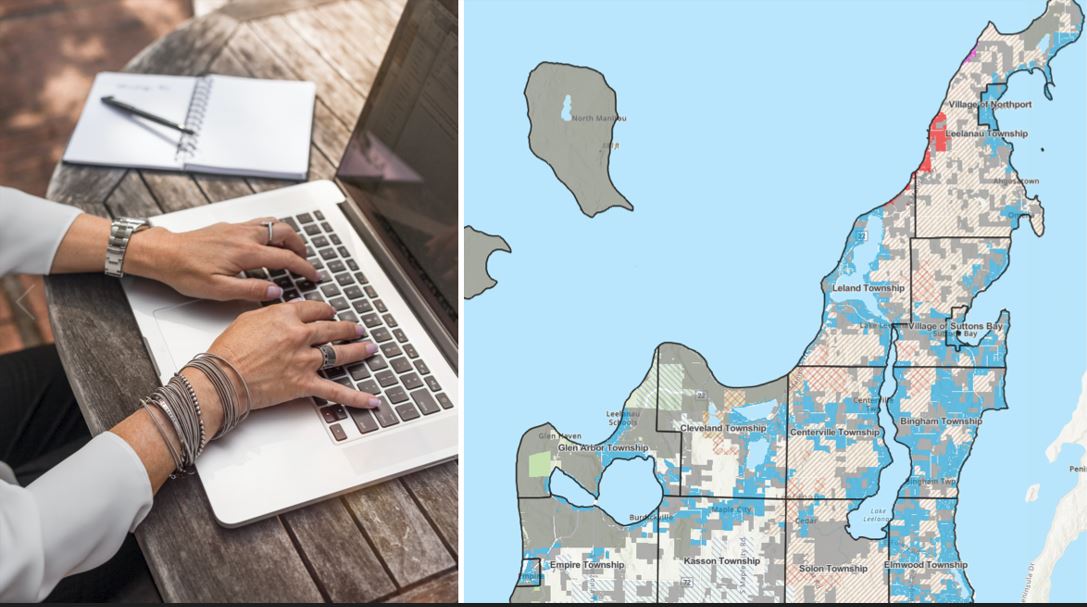 Internet access is an important 'must have' checklist item for many home buyers, especially remote workers.  On October 14th, the Leelanau Ticker posted an article updating the progress being made by the Leelanau Internet Futures Team (LIFT) to provide high-speed broadband services to all residents, farms, and businesses not currently served while providing options for the type of service for those that are.

The following article was published on October 14, 2022, in The Leelanau Ticker.  Written by Craig Manning

Leelanau County’s fiber internet network is getting closer to reality.  This week, the county launched a new tool designed to allow Leelanau homeowners to learn more about the forthcoming fiber rollout. Using an interactive map, a homeowner can enter their address and view details about service providers, anticipated availability dates for broadband service, projected internet speeds, and more. The tool is the latest step in the county’s effort to bring fiber internet connectivity to the vast majority of Leelanau County households – a project anticipated to move into the construction phase within the next few months.

This past spring, the Leelanau County Board of Commissioners voted to allocate $3.2 million of the county’s $4.2 million American Rescue Plan Act (ARPA) dollars to build out a county-wide fiber network. Once completed, the network will bring high-speed broadband internet access to nearly 8,000 unserved or underserved households in the county. For the project, Leelanau County is working with the Alabama-based Point Broadband, a fiber industry leader with networks serving tens of thousands of customers across eight states. Point Broadband is footing the bill for the majority of the network’s estimated $17.4 million capital cost, with Leelanau County only on the hook for $5 million.

According to County Commissioner Patricia Soutas-Little, the county is in the process of securing funding from grants and other sources, to cover the remainder of that $5 million obligation. In the meantime, a dozen or so engineers from Point Broadband are already on the ground in Leelanau County mapping out the network’s eventual buildout.

“Point Broadband has been busy engineering up in the northern part of the county,” says Chris Scharrer, the consultant overseeing the fiber project on Leelanau County’s behalf. “They've been out walking pole lines and underground routes. They haven't started construction anywhere yet, but they are doing all of the preliminary work that needs to be done to get all the necessary permissions in place between the road commission and the other utilities. They will be attaching to electrical poles owned by Cherryland as well as Consumers Energy, and there's some work that they have to go through to get those agreements in place.”

Scharrer says the goal is to get construction underway on the fiber project “some time yet this year,” with Point Broadband aiming to finish the network by the end of 2023. There is one setback, though, and it could mean more immediate buildout work than Point Broadband originally expected.

Per Scharrer, the plan for getting fiber connectivity to all of Leelanau County depended in part on a partnership with the Grand Traverse Band of Ottawa and Chippewa Indians (GTB). At a project launch in April, representatives from Point Broadband and the county met with “all the stakeholders that had an interest in this project,” including the Leelanau County Road Commission, the power utilities, the company leading the construction, and the GTB.

“We met at the county building, and when we left there, everybody was ready to move forward,” Scharrer says. “And the work was dependent on the GTB providing a connection on their existing fiber in the northern part of the county. We wanted to focus on that because the highest number of unserved residents are in Leelanau Township. So, we worked with [GTB] through the summer and up until recently, but we’ve found out that they’re not going to be able to help us right now.”

Per Soutas-Little, “it isn’t that GTB doesn’t want to participate” in the fiber project, but rather that “they’ve run into some issues themselves” that will preclude or delay a partnership with the county. “So, we’ve been diligently working on other options.”

The challenge, Scharrer tells the Leelanau Ticker, is the fact that GTB’s existing fiber was going to act as the “backhaul” or “middle mile” for Leelanau’s new network.

“The backhaul is like the tree trunk [for the network],” Scharrer explains. “If you think about a tree, all the branches of a tree are the residential streets to get to people's homes, and then each home is a leaf. So, that trunk is the part that connects each leaf on each branch to the rest of the world. The backhaul is that trunk cable, which then connects Leelanau County to the rest of the internet. It’s a bigger pipe that connects to all of the littler pipes, which then connect to all the homes, and it's large enough that it can handle the capacity of several thousand homes all connected to it at the same time.”

GTB, Scharrer explains, “built a fiber network themselves a few years back” with cabling in the ground that “has the capacity to serve as a backhaul” for the county’s larger network. “They have several ‘dark fibers’ in that bundle, which means they’re not currently being used for anything,” he says. “And any one of those fibers has the capacity to serve thousands of homes. So that line exists, and GTB is running its own systems on it right now. But as Patricia said, they ran into some issues [with allowing us to connect to their infrastructure]. It was a different type of use for their cable, and it was just very difficult to make it work.”

As a result, Point Broadband now needs to build out its own backhaul infrastructure – which, to a certain degree, was always part of the endgame.

“There was a plan already in place for a secondary connection,” Scharrer says, noting that redundancy is always important in a fiber network to ensure that, “if there are ever any problems [with the main backhaul], the system won’t go down.” That secondary redundant connection will now become the primary backhaul for the network, and Point Broadband will “continue to work with GTB to get a secondary connection.”

Where GTB has existing infrastructure in the ground in Leelanau County, though, Point Broadband will now need to build a connection to its nearest backhaul, which Scharrer says is near Grawn. The connection will need to be built out from scratch, which will cause some shifts in how Point Broadband executes its network buildout.

The good news? The change of plans won’t mean any additional costs for Leelanau County, nor should it mean delays in service activation. “We believe that we will still have everything completed by the end of 2023, as originally planned,” Scharrer says. “It’s just that, once we get our momentum going, we’ll be ramping up the actual construction efforts and building in more areas all at once.”